First of all, Samurai tattoo is popular in Japanese culture. But nowadays this tattoo is known throughout the people of the world. Do you want to know samurai tattoo meaning? 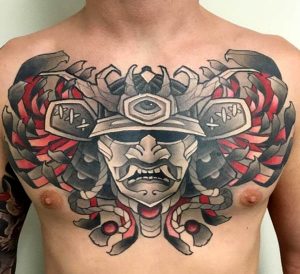 If you like to have a tattoo that will represent your honor and bravery, then you can select this tattoo. Here you can find unique tattoo designs. 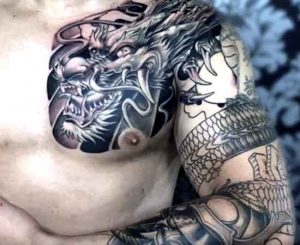 Especially this tattoo represents the quality of bravery and strength that are connected with Noble samurai. Even more, you can easily adorn this tattoo with other cool tattoo designs. 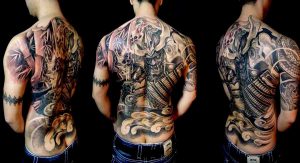 Basically, samurai was the ancient Japanese warriors. Who dedicated their lives to protect the native. Usually, this tattoo symbolizes nobility, courage, respect, power, and masculinity, etc. However, now this tattoo is not only carried by the people of Japan but also become famous among Asian, England, and American

When do you think about the samurais what actually come first to your mind? Is it Sword? Yes, you are right, because it is one of the close aspects of it.

Most importantly samurai sword holds power. And we already know that the martial arts are all out respect, honor, and courage. Basically, these are the important values that they love to hold tight to in order to help them through times that are chaotic. If you respect these core value and also want to represent them through a tattoo you can try this body art. 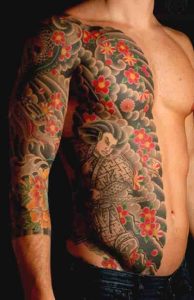 In spite of samurai are the ancient of Japanese warriors. Who not only sacrifice their lives for their nation but also protect their nation with loyalty.

In consequence of the rich cultural and historical value, this tattoo tends to have a lot of symbolic value. Although they come in various styles and sizes. Most of the designs are larger because of detail in this tattoo. Actually, they represent attributes of the samurais.

Here we discussed following the meaning of samurai tattoo, take a view

Tattoo designs which are being symbolized by samurai are representing honor. Because being one of the samurai in ancient japan was a great honor for Japanese people.

On the other hand, the people of Japan had enormous respect for Japanese warriors. Still, samurai arts are commanding respect due to their dutiful nature and strength.

Usually, in an effective way, Samurai has focused their energies on serving. They don’t become boastful and arrogant after being highly respected.

Samurai body art also represents other important things that is bravery. When they try to protect Japanese nobles they don’t care about their lives protection.

However, samurai were also known as the extreme loyal person to their masters. Actually, they are ready to die to protect their privileged master.

What Does a Samurai Mask Represent?

Basically, mask tattoo depicts a face or mask. And without saying anything a face can say a lot. You can get a samurai mask tattoo as a large mid and small size. In fact, some small samurai tattoo is looking great then large and mid-one.

As a final point, samurai tattoo/samurai mask tattoo will not only helps you to build your intriguing personality but also enhance your visible appearance. So you must learn the details about samurai tattoo meaning before getting your final one.

Please feel free to share your valuable opinion with us by commenting below in a comment box.