Actually the meanings of the Japanese tattoos are tied with the different plants and creatures. Usually, the image of traditional Japanese tattoo is used for representing an individual’s aspirations, beliefs or character. And for some specific cases, this tattoo also tells about famous myths and stories.

This tattoo basically symbolizes strength, wealth and ferocity. People of Japanese culture believed that a dragon tattoo has different meanings as a tattoo design. Such as 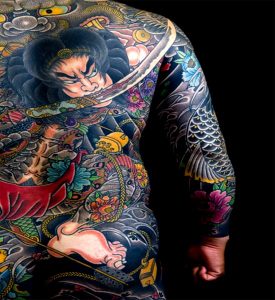 Actually, the phoenix is one type of bird that actually consumed through fire and it rises from the own ashes of its.

This tattoo carries the attribute of real animal-courage and strength. This tattoo represents bad luck, disease, and spirits. And tiger also symbolizes for both autumn and the north, tiger control wind. Tiger is known as one of the sacred animals among 4.

Basically, this tattoo represents both dog and lion. Actually, as a status lion and dog serve as to keep evil out on the other hand as a tattoo image they serve as a protector and courageous.

In the culture of Japanese tattoo, the snake holds the meaning of varies range and they also perform different important functions. The tattoo of Japanese tattoo also represents as a symbol of Divine Feminine and the holy female attributes.

Skull image is a common popular image for tattoo designs in majority tattoo art and culture. In Japanese tattoo skull basically represent the positive side of people’s life cycle. 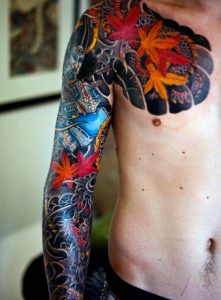 This tattoo has a different meaning. Usually, this tattoo highly valued tattoo designs in the art of the traditional tattoo of Japan. Flowers not only serve us only as a product to brighten our view and to decorate us but also it allows us to cure different disease and relieve ailments.

This tattoo basically represents nature, on the other hand it also symbolize for the cycle of life, birth, death, and rebirth.

In different cultures, flower tattoo has different meanings. For example in the east lotus flower has spiritual meaning on the other hand in the west rose to hold the same meaning as the lotus.

This tattoo basically refers to the spirit. However, this tattoo represents the beliefs of people that demons punishing evil and unjust.

On the other hand, some Oni represents the symbol of good/ positive and also as a protector.

This tattoo has a close connection with the Oni mask tattoo. Both of these tattoos represent demons, where a Hannya mask tattoo symbolizes the female demon.

Wave is the most recognizable art in Japanese tattoo designs. This tattoo basically, represents the belief that like water life has a wave of good and bad feelings. 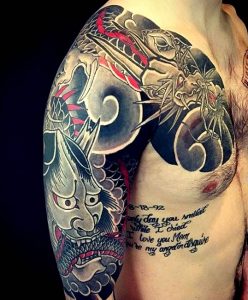 To get a perfect tattoo according to your demand, first of all, you will need to take proper preparation for your tattoo. The preparation tips are given below

Learn everything about the tattoo aftercare instructions. You can also get help from this article – How to take care of a tattoo?

Are You Looking for Something More Unique?

Do you want to make uncommon your tattoo with some more attractive subject matter? If so, you can take a look at our unique tattoo collection. Definitely, you will get benefited from our cool tattoo ideas that we organize for you.

Hopefully, from this article, you get the right Japanese tattoos meanings.

In the comment section below you can share your own opinion and suggestion about Japanese tattoos meanings.